What are Jiggers?
Jiggers are small sand fleas that are found in Sub-Saharan climates and which penetrate the skin of people and animals. Jiggers are also known as Chigoe fleas. Their scientific name is Tunga penetrans. This parasite feeds on warm-blooded creatures such as animals and humans. Because jiggers live in soil and sand, most people who become infected are those living in rural areas. It is estimated that in Kenya more than 4 million people are infected with Jiggers.

Another characteristic of the Jigger flea is that is burrows itself in the feet and hands of people. Particularly small children, who mostly walk barefoot, are at great risk to become infected. The majority of such affected people live in rural areas in huts with earthen floors, which is especially the case in Western Kenya. For Jiggers such dirt floors are excellent territory to live in as they can easily find victims there among its occupants.
When the female wants to lay her eggs, she will bury herself into her victim. Usually the Jigger looks for soft bare skin between fingers and toes. The jigger remains the whole time under the skin feeding itself on blood until the eggs are fully developed. That takes about two weeks. The female lays about 100-200 eggs at a time. After a few days the eggs hatch and then go through the larvae and pupal stage in order to become an adult in about 2 to 3 weeks’ time. The adult fleas, which are still buried in the human flesh, will mate and the cycle starts all over again.

Do Jiggers cause pain?
When jiggers burrow into someone’s skin for the first time, a victim has little or no pain. Hence that victims are normally not aware that they are infected. However, once the eggs are laid and begin to grow, the infected spot starts to become very painful. That spot will swell up and for most sufferers walking becomes very painful. That is why they often begin to walk on their heels.

In severe cases, children may get anaemia because Jiggers use their blood as food. Other complications may include:
•    Deformed fingers or toes
•    Loss of finger- or toenails
•    Big sores
•    Amputation of fingers or toes

But jiggers do not only cause health problems. It also leads to other social and economic problems. For example, children may be unable to go to school and adults may be unable to work. In some communities, there is stigmatization against jigger victims, which can lead to neglect and self-esteem issues.

How many infected people are there?
Kenya has a total population of about 40 million people. It is estimated that approximately 10% of them are infected with Jiggers. Ikolomani (part of the western County of Kakamega) has a population of 113,500 of which more than 25% are infected. That means a total of 28.375 people of which 80% (about 22.000) are children of between 1 and 10 years old. However, if we are able to carry out our project in Ikolomani during the next 4,5 to 5 years, then all of those children and adults are being helped which means that this horrible health problem will be completely eradicated. At the same time, we trust that the central government in Nairobi will be encouraged to do something similar in the rest of their country because that is clearly not our task, nor our mission. 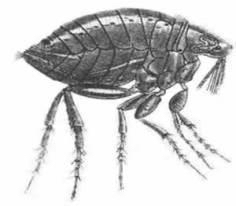 Jigger is a small sand flea. 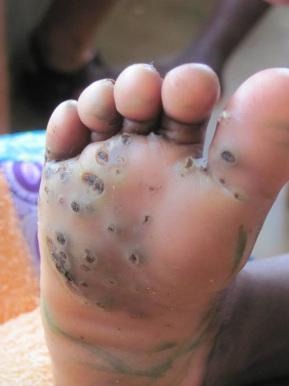 A foot full of Jiggers. These parasites dig themselves into feet because they cannot jump very well.