About us
My name is Gerard Nederpel (1941), writer of this letter. One of the things my wife Tineke (1953) and I have in common is our belief in God. HE plays an all-important role in our lives as our Guide. That is also what we share with Jamin. Over the years we have got to know him and his family as very devout people. It is their faith in God that gives them the strength to survive on a day to day basis. That they, under such living conditions, maintain their unwavering belief in Him is something we greatly admire.

My trip to Kenya
From 29th July until 6th August 2015 I visited Jamin and his family in their rural home in Kakamega County in Western Kenya and stayed with them in their small clay built house of about 5×6 metres without running water or sanitation (see photo). I obtained a good impression how they and their neighbours around them live and try to survive. During my career I have travelled a great deal and visited about 68 countries, among which quite a few third world ones. Yet, I have never come into such close contact with real poverty. This one week has made a lasting impression on me. Don’t we have a fantastic rich life in the Western World by comparison? That is why Tineke and I decided to take action. We set up the Gertin Foundation in order to help the disadvantaged people and children in Western Kenya to beat the menace called Jiggers.

How poor is real poverty?
Once I heard someone in a the Dutch TV programme say that we in the West are sometimes prepared to donate a small part of what we have for a good cause, whilst poor people share the little they have with each other. That is exactly how Jamin and his brother Benard (Ben ) have always lived. They first think of others before they think of themselves. That became very clear to me when I spoke with Ben a few times. Ben is 45 years old and has a tiny grocery shop along the road where the family Muliru lives (see photo). He is a very cheerful chap who always greets you with a big smile on his face (see photo). In order to get an impression of everyday life I had a few conversations with him. One of the things I wanted to know was what the various prices were of the things he sells.

Talking about compassion
During one of my conversations with Ben, a small boy appeared at the barred window opening. Very timidly he asked Ben something in Swahili. Ben asked me to come over to have a look at him. He showed me how poorly this boy was dressed and also he did not look very clean. Ben explained that from his appearance one could see how poor the small boy really was. He said: “the little chap asked for a cup of sugar, but he did not have any money on him. I have given him the sugar, what else can I do, send him away?” When I asked if he would ever get his money back Ben simply said that he knows everyone personally in the neighbourhood who buys groceries from him and said that if these people get some money, they will pay him back. A story with really touched me was the following. Five years ago two brothers (no family) who were 5 and 7 years old at the time suddenly became orphans because their father, who was a ‘Boda Boda’ (a taxi service by motorbike) was killed in a traffic accident. The wife of the man was not their real mother, so she decided to take off. Jamin and Ben took them under their wing. They are now 10 and 12 years old, are going to school and they are both doing well. A similar thing happened with a girl of 11. Ben talked to his wife whether to take her into their home. Their clay built dwelling is just as small as that of Jamin, but they made a room available for her. Modesa is now 17 years old and she is doing well. Aren’t those moving stories of sharing with others of what little they possess? I must add that Jamin, in all the 9 years that we have known him, never told us any of this!

Why do we have such great trust in Jamin?
As mentioned in his story Tineke and I have known Jamin since 2008. During his study he visited us several times in our home in Rotterdam. In all the years that we supported him with about €100 to €150 per month, he has never told us anything which later appeared not to be true. As already mentioned I have travelled extensively during my career and visited quite a few third world countries. Nearly everywhere one meets corruption. For poor people I can even understand it because what do you do when you have nothing? However, from time to time one meets a real gem of a person. Jamin is one of those. He would never claim anything which isn’t rightfully his. His brother Ben told me in passing that however poor they were in their youth, they never stole anything. I found that remarkable if one realises how much they were confronted with hunger when they were little.

What activities have we undertaken with Gertin since August 2015
In August 2015 we started to edit Jamin’s story and thereafter translated it into Dutch. His story, other attachments and photographs, a total of about 30 pages, we sent by ordinary mail to all our personal contacts as well as to 25 National and Regional newspapers in the Netherlands. Unfortunately, none of these newspapers published anything. The same information was also sent to all the major International and Dutch foreign aid agencies. From most of them we received a polite e-mail to say that they found our project interesting, but that they either had no budget available (anymore) or invented some other excuse. Only the Dutch Aid Agency ‘de Wilde Ganzen’ (‘the Wild Geese’) invited us for a meeting. They told us that, in principle, they are willing to finance two thirds of the necessary funds, provided we were able to put up one third. However, they set a number of conditions which our project is not likely to be able to meet. For example, they stipulate that a special clinic should be built and that only doctors should treat people with jiggers, not laymen. In our opinion one can better spend that kind of money on treatments rather than on a building and other expensive overheads.

Health Fair
A bright spot in our letter campaign was that we were offered a free stand at a 4 day Health Fair which took place in February 2016 in Utrecht. We had large, dramatic pictures made which showed the Jigger problem in detail. With the assistance of a friend we put up our stand (see photo). During the four exhibition days a few other friends helped us to talk to visitors to try to get them to leave their email address so that we could send them the complete documentation afterwards. In the end 140 people did so and a week after the fair we sent each of them a personal e-mail. One couple donated € 500.00. One lady, Wilma de Bruin, promised to raise money during the well-known 4 day walking event at Nijmegen which is held there every year. She intended to take part in July of that year and have herself sponsored under the theme ‘that one cannot walk with infected and sore feet’. She did indeed what she had promised and managed to collect € 1,130.00 in total. Obviously Jamin was extremely happy with that donation. Having said that, one-time donations, however well meant, are not a solution to our 4,5 to 5 year project with the aim to help 22,000 small children to get rid of their terrible Jigger problem. 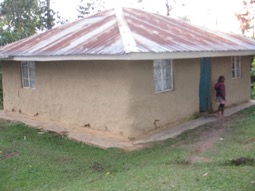 In this mud house of the family Muliru Gerard has stayed in for a week. The house has a lounge and two bedrooms, but no kitchen, toilet or bathroom. 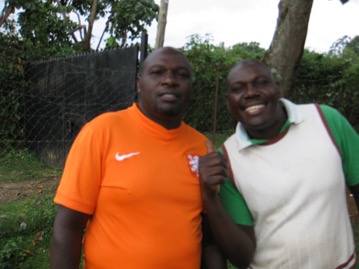 Jamin on the left and his always smiling brother Ben. Jamin wears his Dutch National Orange football shirt which reminds him of his time in Holland. 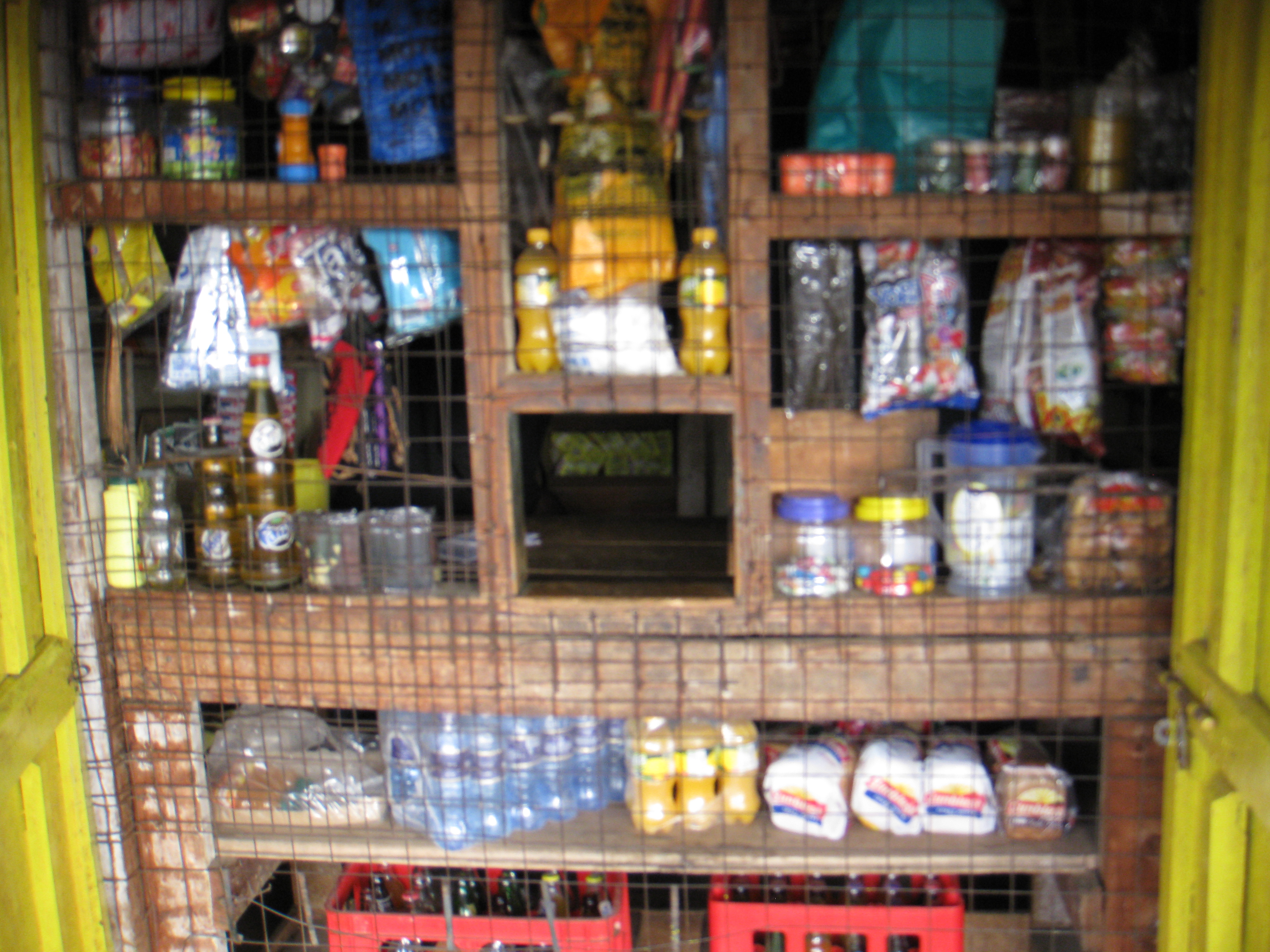 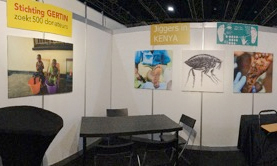 Our simple but impressive stand at the Health Fair in Utrecht in February 2016.